As a child, Joan Rusden knew she wanted to be a SPELD teacher, supporting dyslexic learners like herself.

My father, two brothers and I are dyslexic – it runs in our family. I remember when I was five, my working memory was poor and I couldn’t recall some words between pages. I was called dumb by other kids when they heard me read aloud. It made me feel terrible. I knew I wasn’t dumb because Mum and Dad believed in me, but they knew it would get hard for me.

When I was seven, Mum heard about SPELD. After an assessment, I started lessons with Margaret Beans just outside of Fielding. I remember the first meeting with Margaret. She asked me to sing the alphabet. Even though I couldn’t get past Q she said: “You’re so clever!” It was the first time a teacher had actually encouraged me. Margaret told me she would teach me the alphabet in a way I had never learned it before, with sounds – what we know as phonetics now. That’s the way our lessons went for a long time. The light came on and I started to feel hopeful. I progressed quite quickly. In my head I told myself, reading is actually easy. If only I had been taught the right way, I would have understood it. My classroom teacher was the best in the whole school, but she didn’t get me.

My SPELD teacher was the best thing that ever happened to me.

My SPELD teacher was the best thing that ever happened to me. I really loved going to lessons. I still remember some of the things she taught me. She was always so positive and helped me recover my self-esteem. I felt much happier in myself. Margaret Beans got me to write to the government when I was about nine. I didn’t like it because I knew I was spelling words wrong. She said: “I know that, but I want to get them to see that people need help. They need more support in schools.”

Mum didn’t want to tell me I had dyslexia because she thought I would be too down about it. When I was about nine, I picked up a SPELD newsletter and started reading it. It said enough to tell me I had dyslexia. I burst into tears and asked Mum why hadn’t she told me? I knew I was intelligent because I got things that other kids didn’t. I wanted to know why I was different. It was such a relief because at last there was a reason and name for it.

During my first year at high school, I was so frustrated to be put in the bottom class. I asked Mum to get me out of it. Mum had fought for me for so long, but she was too shy to say something. Finally in the 4th form I was put in an average class and loved it. Mum said: “You have to work hard or they’ll notice!” I did work hard. The only thing they noticed was that I was a bit of a bad speller. During my 7th form year, I remember a teacher saying how surprised she was that I was still at school.

I stayed at school because I had made up my mind that I wanted to be a SPELD teacher. I knew I wanted to help people like me. When I was nine years old, I remember sitting in a circle of kids and the teacher asked us what we would like to do. I wanted to say ‘teacher’ but wouldn’t tell her that as I knew she wouldn’t believe me.

I started training to be a primary school teacher in my mid-20s. I wasn’t frightened because I knew that was where I was meant to be. I was shocked my training included nothing about dyslexia. I was thinking: I know how to teach these children to read and write better than you guys. Just get through. By then I could write essays and assignments, but it took a lot of effort. I left half-way through my second year. There was so much theory that didn’t feel relevant, and I wasn’t suited to the teaching style they were using.

Later on, when my children were six and eight, I trained in Early Childhood Education. I did it to reach my goal of becoming a SPELD teacher. I needed to have a classroom teaching qualification and experience. I trained with SPELD in 2014 and it was excellent. Everything made sense. It opened my mind. I thought, finally this is relevant – very relevant.

It’s a neat thing is to say to parents: “I’ve been there. I understand.” That’s a blessing in disguise. I was scared to tell parents to begin with and then started to realise they want to know. I’ve learned to work hard and I have loads of resources. It’s so much fun but sometimes challenging going into schools for lessons as they don’t always completely understand.

What I love most about being a SPELD NZ teacher is seeing my students progress. The progress may be slow compared to other students, but that doesn’t matter to me. As long as I’m seeing some sort of progress, I’ll continue to be passionate about my job. Forty years ago, I would never have guessed that one day I wouldn’t just be teaching as a SPELD NZ teacher in my local area of the Manawatu, but that I would also be teaching children from as far north as Auckland and as far south as Dunedin via Zoom. Now that’s exciting to me. As the saying goes, the world’s your oyster and it’s up to you what you make of it. 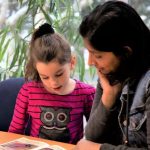